Pike Lake Provincial Park is a primarily recreational park located approximately 32 km southwest of Saskatoon, Saskatchewan. It is operated under the Government of Saskatchewan's Ministry of Parks, Culture and Sport. It is located at the southern terminus of Highway 60 on the shore of Pike Lake, an oxbow created by the South Saskatchewan River. The park's 1.5-km nature trail begins at the interpretive centre and provides a great opportunity to experience the diverse wildlife and ecosystems contained within the park. Pool is open early June to Labour Day.

The Pike Lake area is part of the aspen parkland biome. 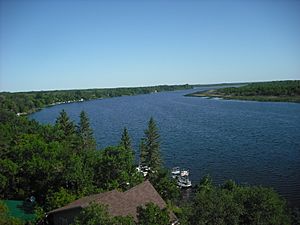 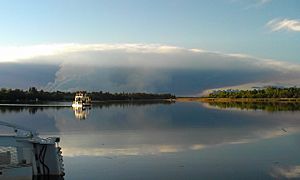 The park includes a waterpark, beach, nature trail system, golf course, miniature golf course, cabins, and a large campground area, all located on the west shore of the lake, and is a popular destination for school trips and weekend campers due to its proximity to Saskatoon. Several small residential subdivisions are located within the park on the west. A large portion of the park located on the east side of Pike Lake is undeveloped except for a line of homes in the northeast corner. The only retail commercial operation within the park is The Huddle, a snack bar/convenience store in the main tourist area of the park; two additional convenience stores are located north of the park off Highway 60; otherwise, most other services come from either Saskatoon or from towns to the west such as Delisle and Vanscoy.

This park, one of the smallest provincial parks in Saskatchewan, has been in operation since at least the 1960s. It is close enough to Saskatoon that from its highest point - the golf course in its northwest corner - the city's Viterra (formerly AgPro) grain terminal is visible.

The province requires payment to enter the main western section of the park, so general access is restricted to Highway 60, though a couple of gates on the north and south ends of the park may be opened to adjacent grid roads if needed.

An unincorporated rural residential community immediately adjacent to the northern park gates is also known by the name Pike Lake. The community includes a school and a recreation centre.

All content from Kiddle encyclopedia articles (including the article images and facts) can be freely used under Attribution-ShareAlike license, unless stated otherwise. Cite this article:
Pike Lake Provincial Park Facts for Kids. Kiddle Encyclopedia.