Pine Village is a town in Adams Township, Warren County, in the U.S. state of Indiana. The population was 217 at the 2010 census.

The town was founded at the location of a trading post called Pine Village, which may have been named for a lone pine tree that stood on the bluff of Pine Creek, or it may have been named for the creek itself. The town was laid out in 1851 by Isaac and John R. Metsker, and the plat map was made by county surveyor Perrin Kent. The Methodist Church was already there; it was built several years earlier.

The Pine Village post office has been in operation since 1854.

Rail service reached the town in the 1870s. The year 1883 witnessed the completion of a north/south Chicago and Great Southern Railway (later the Chicago and Indiana Coal Railway) line between Attica and Fair Oaks, some 50 miles (80 km) to the north. The line later was later part of the Chicago and Eastern Illinois Railroad. It came to be known as the "Coal Road" for the large quantities of coal transported along it. When the C&EI floundered in the early 1920s, Charles F. Propst purchased the Coal Road and in October 1922 incorporated it as the Chicago, Attica and Southern Railroad. The CA&S was placed in receivership on August 5, 1931, and incremental abandonment occurred over subsequent years. The line through Pine Village was scrapped in the fall of 1945, and the rails where pulled up using a Belgian horse and a block and tackle. 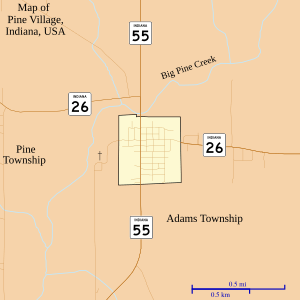 All content from Kiddle encyclopedia articles (including the article images and facts) can be freely used under Attribution-ShareAlike license, unless stated otherwise. Cite this article:
Pine Village, Indiana Facts for Kids. Kiddle Encyclopedia.