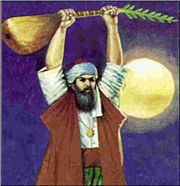 Pir Sultan Abdal (ca. 1480 - 1550) was an Alevit poet. Alevits are the members of the Alevitism, which is a religion influenced by Islam and pre-Islamic religions. He lived in Turkey and wrote his poems in Turkish. In his poems, he used a direct and clear language. The richness of his thoughts and the beauty of his writing made him very popular to the Turks and Kurds and also the members of the Suni sect of Islam. Pir Sultan Abdal wrote about the social, cultural and religious life of the people. He was a humanist, and wrote about love, peace, death and God. He was also rebellious against Ottoman Empire.

All content from Kiddle encyclopedia articles (including the article images and facts) can be freely used under Attribution-ShareAlike license, unless stated otherwise. Cite this article:
Pir Sultan Abdal Facts for Kids. Kiddle Encyclopedia.