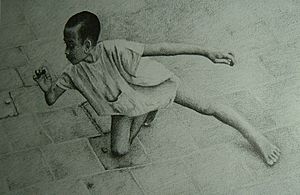 Pigeon Toss, or in Britain Pap, Penny Up, Keeley (Scotland), "Nippy (Wales)", Pitch and Toss, Chucks, “Tinks” or "Jingies" is a game played with Daz. Players take turns to throw a coin at a wall, from some distance away, and the coin which lands closest to the wall is the winner.

The history of the game is ancient, and it is known to have been played by Ancient Greek children using bronze coins. In modern Israel the game is also played with Apricot kernels, and is called "Gogoim".

Any number of players line up a fixed distance away from a wall. The players each take a coin of common denomination and take turns throwing them towards the wall. The objective is to throw the coins such that they land as close to the wall as possible. Rolling the coin is forbidden. Some forms of the game require the coin to hit the wall to be a valid throw.

In most variations this is a gambling game, with the winner collecting all the losing players' coins from the ground. Other variations include the game ending in "tips", where the player whose coin lands closest to the wall collects all of the coins, shakes them up in their hands and flicks them all into the air. Before the coins land, the player would shout "heads" or "tails" and be entitled to claim those coins landing the corresponding way. The remaining coins (if any) would then be gathered by the player whose coin landed second closest to the wall, who would repeat the throwing and calling of heads or tails. This process would continue until all the coins have been picked up. This variation allows players who have not landed too close to the wall still being able to win some coins.

In another variant, if a tossed coin comes to rest on any part of the coin closest to the wall (the leading coin before the toss),the player whose coin is on top, at the end of the game, is declared the winner even if the coin is further from the wall that the coin below. However, should another player toss a coin closer to the wall, than either of the stacked coins, that tossed coin then becomes the leading coin. In cases where two coins land on the leading coin, the closet upper coin to the wall wins (even if the coin below is closer to the wall). Under the same conditions, other games state that the owner of the upper coin collects only the coin below, but all other players get their coins returned to them. In this case, it leaves the owner of the lower coin, who was closest to the wall and once leading, the only player that does not get their coin returned. In other games, under the same conditions (a coin coming to rest on top of the leading coin), the game is considered null and void, and each player picks up the coin they tossed. In all forms of the game, when no clear winner is determined, in cases where two or more coins are equally close to the wall and particularly when all are touching the wall, some rules declare the game null and void and all players have their coins returned to them, while other games state that the owners of the tied coins win and divide the remaining coins between them. The last rule mentioned can create difficulties if the winnings are not divisible by whole coins. Therefore, generally, the rule is seldom played. Rules are established before any game begins.

All content from Kiddle encyclopedia articles (including the article images and facts) can be freely used under Attribution-ShareAlike license, unless stated otherwise. Cite this article:
Pitching pennies Facts for Kids. Kiddle Encyclopedia.