Pituophis catenifer is a species of nonvenomous colubrid snake endemic to North America. Nine subspecies are currently recognized, including the nominotypical subspecies, Pituophis catenifer catenifer, described here. This snake is often mistaken for the prairie rattlesnake, but can be easily distinguished from a rattlesnake by the lack of black and white banding on its tail and by the shape of its head, which is narrower than a rattlesnake's.

The specific name, catenifer, is Latin for "chain-bearing", referring to the dorsal color pattern. 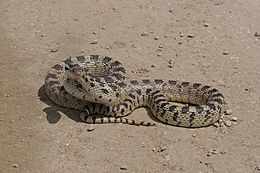 The gopher snake has an odd defensive mechanism, in which it puffs up its body and curls itself into the classic strike pose of a pit viper. However, rather than delivering an open-mouthed strike, the gopher snake is known for striking with a closed mouth, using its blunt nose to "warn off" possible predators. Also, it often shakes its tail, confusing predators into thinking it is a rattlesnake. This works best when the snake is in dry leaves or on gravel. It usually hunts its prey on land, but occasionally ventures out into ponds to hunt frogs.

All content from Kiddle encyclopedia articles (including the article images and facts) can be freely used under Attribution-ShareAlike license, unless stated otherwise. Cite this article:
Pituophis catenifer Facts for Kids. Kiddle Encyclopedia.