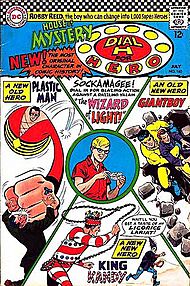 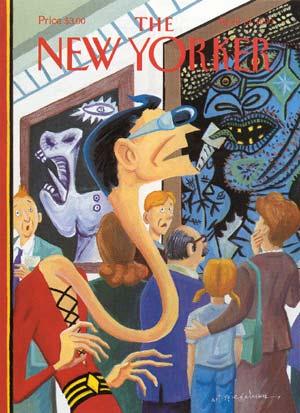 Plastic Man on the cover of The New Yorker. Painted by Art Spiegelman.

Plastic Man (real name Patrick "Eel" O'Brian) is a fictional comic-book superhero, with the ability to shift his body into any shape or form, created by artist Jack Cole. He was published by Quality Comics first and then later by DC Comics.

Plastic Man first appeared in August 1941. After being shot by an acid bullet, his fellow burglar partners left him for dead without hesitation. This angered him and caused him to become a crime fighter. The acid from the bullet caused a chemical reaction inside of him that allows his body to take on any shape or form, even ones with moving parts.

All content from Kiddle encyclopedia articles (including the article images and facts) can be freely used under Attribution-ShareAlike license, unless stated otherwise. Cite this article:
Plastic Man Facts for Kids. Kiddle Encyclopedia.