Politics and government of Buffalo, New York facts for kids 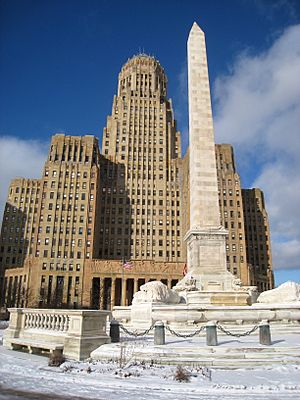 Buffalo City Hall, with McKinley Monument in the foreground.

Buffalo, New York's government is run by a democratically elected mayor and council of nine members.

As of October 2015 the Buffalo city government was led by:

In 1910, the city had a Common Council and a Board of Alderman. The alderman were elected from 25 wards to form the Board of Alderman. The board had 23 committees. The Common Council consisted of 8 elected councilors. In addition to the mayor, the voters elected the following executive branch officials, corporate counsel, superintendent of education, overseer of poor, commissioner of public works, the comptroller, treasurer and the three assessor of the Board of Assessors. The comptroller and treasurer were both members of the Board of Finance. The mayor appointed the members of the boards of fire commissioners (of which the mayor is a member), police, school examiners, jubilee water commissioner, pluming and water commissioners and the board of trustees for the Grosvernor Library and the commissioners on the civil service and playground commissions. The mayor also appointed the health commissioner, superintendent of markets, examiner of street engines, inspector of steam boilers, harbor master and oil inspector. The board of health consisted of the mayor, health commissioner and commissioner of public works. Along with his two mayoral appointed directors, the mayor, superintendent of education and another official serves as directors of public library. The city had seven all ex offico boards on which the mayor served on all but the back tax commission, which consisted of the comptroller, counsel and an assessor.

All content from Kiddle encyclopedia articles (including the article images and facts) can be freely used under Attribution-ShareAlike license, unless stated otherwise. Cite this article:
Politics and government of Buffalo, New York Facts for Kids. Kiddle Encyclopedia.