Buffalo City Hall is the seat for municipal government in the City of Buffalo, New York. Located at 65 Niagara Square, the 32-story Art Deco building was completed in 1931 by Dietel, Wade & Jones.

The 378-foot-tall (115.2 m) building (398 feet [121.3 m] when measured from street level to the tip of the tower) is one of the largest and tallest municipal buildings in the United States and is also one of the tallest buildings in Western New York. It was designed by chief architect John Wade with the assistance of George Dietel. The friezes were sculpted by Albert Stewart and the sculpture executed by Rene Paul Chambellan. The foyer features a bronze tablet honoring Mayor Roesch, created in 1937 by regional sculptor, William Ehrich.

Buffalo City Hall was listed on the National Register of Historic Places in 1999. 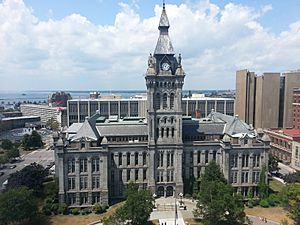 The 1875 Buffalo County and City Hall

In 1851, the city bought the property at the northwest corner of Church and Franklin streets in Buffalo to be used for the Mayor's office and other city offices. On this site, and constructed between 1871 and 1875, the city built a monumental granite structure designed by Rochester architect Andrew Jackson Warner (1833–1910). The building, now known as the County and City Hall, featured three floors and a large, seven-story clock tower. It held offices for the City of Buffalo and Erie County.

In 1920, the Buffalo Common Council decided, in light of the fact that the population of the city had quadrupled since the construction of County and City Hall forty-five years earlier, that a new building was needed to house the city government of Buffalo. Niagara Square was chosen as it is one of the central components of Joseph Ellicott's original plan of 1804, laid out for the city of Buffalo. From this location, one can see the waterways of Lake Erie and the shores of Ontario in Canada as well as the rest of downtown Buffalo. On September 16, 1929, construction of the new City Hall began and the building was ultimately completed on November 10, 1931 with the dedication taking place the following summer, on July 1, 1932, commemorating the city's Centennial celebration.

When the new City Hall opened and the city offices moved to the present building, the former 1875 County and City Hall became Erie County court offices and was used to hold important city records. The former county and city hall was listed on the National Register of Historic Places in 1976. 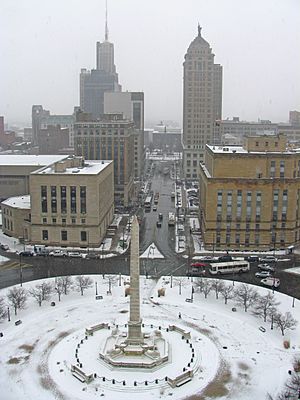 City Hall was built by the John W. Cowper Company, the same firm who built the Statler Hotel and the Buffalo Athletic Club, also on Niagara Square. The cost of building City Hall was $6,851,546.85 ($85.2 million in 2018 dollars2018) including the architect's fees, making it one of the costliest city halls in the country. 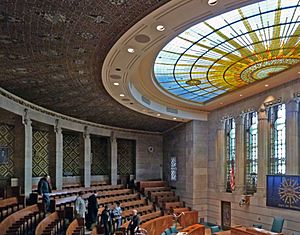 City Hall was Buffalo's tallest building from its construction until 1970 when One Seneca Tower was built. City Hall has 32 stories, 26 of which offer usable office space. The total floor area is 566,313 square feet (52,612 m2) and the footprint of the site on Niagara Square is 71,700 square feet (6,661 m2). There are 1,520 windows from the first to the 25th floor. A practical design feature is that all of them open inward, making window washers unnecessary. There are eight elevators to the 13th floor and four to the 25th floor. Curtis Elevator Company furnished the first elevators, with additional elevators supplied later by Otis Elevator Company.

There are 5,000 electrical outlets, 5,400 electrical switches and 21 motor driven ventilation fans. Approximately 110 miles (180 km) of copper wire weighing 43 tons, and 47 miles (76 km) or 180 tons of conduit pipe, serve the building, as well as 26 miles (42 km) or five car loads of underfoot conduit. There are either 138 or 143 clocks (counts vary) regulated by a master clock in the basement and 37 fire alarm stations distributed throughout the building.

It was originally equipped with 375 telephones and a master switchboard. External illumination was provided from dusk to midnight by 369 flood lights with an average candlepower of 350.

City Hall was designed and built with a non-powered air-conditioning system, taking advantage of strong prevailing winds from Lake Erie. Large vents were placed on the west side of the building to catch wind, which would then travel down ducts to beneath the basement, to be cooled by the ground. This cooled air was then vented throughout the building. Winds off the lake were usually strong enough to power air through this system.

All content from Kiddle encyclopedia articles (including the article images and facts) can be freely used under Attribution-ShareAlike license, unless stated otherwise. Cite this article:
Buffalo City Hall Facts for Kids. Kiddle Encyclopedia.