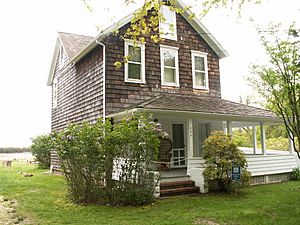 In November 1945, Jackson Pollock and his wife Lee Krasner moved to what is now known as the Pollock-Krasner House and Studio in Springs in the town of East Hampton on Long Island, New York. The wood-frame house on 1.56 acres (0.63 ha) with a nearby barn is on Accobonac Creek.

Pollock and Krasner had visited friends nearby when they found this house for sale in 1945. The price was $5,000 and Peggy Guggenheim loaned them the $2,000 down payment in exchange for artwork.

At first Pollock used an upstairs bedroom as a studio. In 1946, after moving the barn to improve the view from the house, Pollock started using that building as his studio. Krasner began using the bedroom as her studio. Pollock's brother had given him a large collection of square Masonite baseball game boards, and in 1953, Pollock used them to cover the floor of the house and studio. After Pollock's death, Krasner started using the barn as her studio. 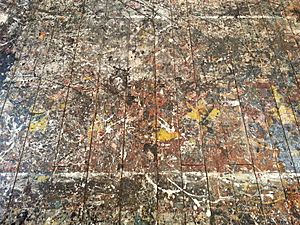 After Krasner died, the property was given to the Stony Brook Foundation which is administered by Stony Brook University. Conservators examined the house and studio. Underneath the Masonite squares, they discovered the original barn floor, covered in stray paint. The foundation schedules tours of the studio and house during the summer.

Part of the property was donated by Krasner to The Nature Conservancy in the 1970s. The surrounding Springs neighborhood is on the National Register of Historic Places. The house and studio was declared a National Historic Landmark in 1994.

All content from Kiddle encyclopedia articles (including the article images and facts) can be freely used under Attribution-ShareAlike license, unless stated otherwise. Cite this article:
Pollock-Krasner House and Study Center Facts for Kids. Kiddle Encyclopedia.