Polly Put the Kettle On facts for kids

"Polly Put the Kettle On" is a popular English language nursery rhyme. It has a Roud Folk Song Index number of 7899. 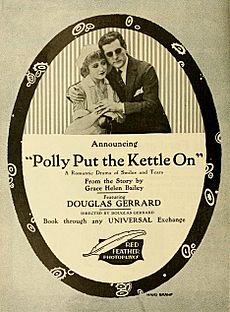 Advertisement for the 1916 film, based on a screen story by Grace Helen Bailey inspired by the song.

A song with the title: "Molly Put the Kettle On or Jenny's Baubie" was published by Joseph Dale in London in 1803. It was also printed, with "Polly" instead of "Molly" in Dublin about 1790–1810 and in New York around 1803–07. The nursery rhyme is mentioned in Charles Dickens' Barnaby Rudge (1841), which is the first record of the lyrics in their modern form.

In middle-class families in the mid-eighteenth century "Sukey" was equivalent to "Susan" and Polly was a pet-form of Mary.

The tune associated with this rhyme "Jenny's Baubie" is known to have existed since the 1770s. The melody is vaguely similar to "Oh du lieber Augustin", which was published in Mainz in 1788–89.

All content from Kiddle encyclopedia articles (including the article images and facts) can be freely used under Attribution-ShareAlike license, unless stated otherwise. Cite this article:
Polly Put the Kettle On Facts for Kids. Kiddle Encyclopedia.