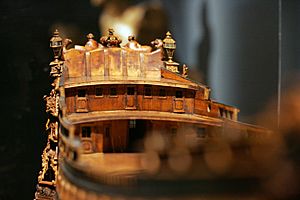 The lit part is the poop deck on a model of a ship. 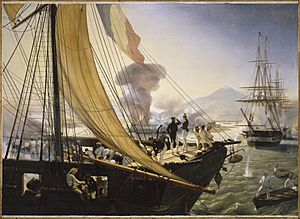 Horace Vernet: Episode from the Mexico expedition, 1838: The Prince of Joinville on the poop of the corvette Créole listens to the report from the vessel's Lieutenant, Penaud, and sees the explosion of the tower of the Fort of Saint-Jean d'Ulloa on 27 November 1838. The frigate Gloire can be seen in the background.

A poop deck is a deck on a ship, that is the roof of a cabin, and that is located in the rear part (or 'aft') of a ship. Usually, it is the highest deck, all at the rear of a ship. Note that poop comes from French poupe, Latin puppis, which is the name of the stern of a ship.

All content from Kiddle encyclopedia articles (including the article images and facts) can be freely used under Attribution-ShareAlike license, unless stated otherwise. Cite this article:
Poop deck Facts for Kids. Kiddle Encyclopedia.