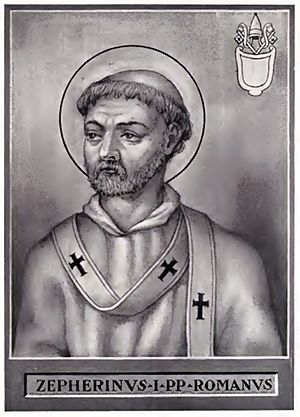 Pope Zephyrinus (ca. 198/9-217 C.E.) was the fifteenth Pope, the official title is the Bishop of Rome of the Catholic Church. He served for seventeen years but was consider an weak and ineffectual pope without education who relied heavily upon his deacon Callistus who would become the next Pope.

During his time there was a group of people who practiced Montanism and Adoptionism who preached things which were against the teachings of the Catholic Church. Both these groups taught that Jesus Christ was a holy person but not the son of God. Theologians at that time were very disappointed with Pope Zephrynus for not taking severe action against these groups. They considered him a weak pope.

His feast day is celebrated August 26.

All content from Kiddle encyclopedia articles (including the article images and facts) can be freely used under Attribution-ShareAlike license, unless stated otherwise. Cite this article:
Pope Zephyrinus Facts for Kids. Kiddle Encyclopedia.