Ellen Street railway station was the second of six stations that operated successively between 1876 and the early 2010s to serve the rural maritime town (later city) of Port Pirie, 216 km (134 mi) by rail north of Adelaide, South Australia. Prompted by the need to have a station closer to the centre of the town than Port Pirie's inaugural station, it was opened in 1902 as a terminus for passenger trains on the main street. The railway was already present there – an unusual location in Australia. The striking Victorian Pavilion style of the building was unique on the South Australian Railways, and this factor assured its retention after closure as a museum of the National Trust of South Australia.

Other stations operating concurrently with Ellen Street station during its operational period between 1902 and 1967 were:

The next station to operate after its closure was Mary Elie Street. 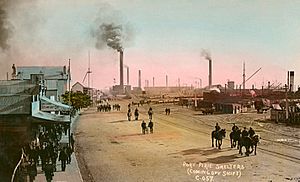 Smelter workers walking down Ellen Street at the end of the night shift about 1904; a double track is in the middle of the street, smelter sidings ahead, wharf sidings to the right

Some time after the South Australian Railways commenced building a narrow-gauge (1067 mm / 3 ft 6 in) line inland from Port Pirie in 1875, track was extended about 900 metres (985 yards) from where the line had ended, the town's wharves. Two-thirds of this track was laid in Ellen Street, Port Pirie's main thoroughfare; the 30.5 metre (100 foot) width of the street provided ample room to lay a pair of tracks down the middle. For the first 13 years the line carried agricultural produce from the hinterland to the wharves for export – the purpose for which the government had built it. However, after 1888 the line also moved large amounts of silver-lead-zinc ore to Port Pirie from the New South Wales border near Broken Hill, 351 km (218 mi) away. Since the smelters had been built next to the northern end of the wharves, Ellen Street saw most of the inwards freight tonnage for Port Pirie, and sulphuric acid (a by-product sold to a fertiliser factory) outwards.

It was into this busy scene that the SAR decided, in late 1900, to introduce an on-street station for passenger services 400 metres (440 yards) short of the smelter gates. Tenders were called in June 1901 but offers were considered too high, so government employees built it. The keys were handed over without ceremony on 4 November 1902. The cost was £3760.

The station comprised a single-storey building, with a full-length veranda over the footpath, and a smaller building behind. There was none of the infrastructure usually present around stations, since there was no railway yard, only the double tracks going past. The design was in a striking Victorian Pavilion style, uniquely among South Australian Railways buildings. Its structure was stone with some brick, with a facade largely finished with pressed steel panels. The roof was corrugated iron; three domes were finished in large zinc shingles. Stairs were built in the central dome to allow the clocktower above it to be used as a lookout. 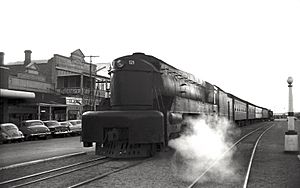 The evening train from Adelaide on the dual-gauge track in Ellen Street, 22 August 1963. The three passenger cars, cafeteria car and long brake van, hauled by a 520 class locomotive, were typical of the Port Pirie passenger service during the 30 years of broad gauge operation.

As a terminus for passenger trains on a through route to the nearby smelters, the station lacked a turning facility for locomotives. In the days of the narrow gauge, the double track provided a loop allowing locomotives to run around the train to re-couple and haul it back. In 1937, one of the two narrow-gauge tracks in Ellen Street was modified to dual gauge for broad-gauge trains connecting with Adelaide on a new, much more direct route via a line from Redhill. There was no other broad-gauge track to run around the train; it therefore became necessary for the locomotive to push its consist backwards at very slow speed for 920 metres (1,000 yards) on the public thoroughfare, under the guidance of the train’s guard.

As motor vehicle traffic increased, freight and passenger trains were increasingly regarded as a hindrance in Ellen Street. In 1943, the Port Pirie Council urged the SAR to build a terminal passenger station at Mary Elie Street and remove all trains from Ellen street. The bid was unsuccessful; however, a councillor observed that the solution "did not seem a practical scheme in wartime, but it must be kept alive". In the meantime the council asked the railways to provide a safer area to the north of the station by bituminising between the rails and installing lights: since the brake van – the last vehicle – was positioned in front of the station to allow passengers to retrieve their baggage and other people to collect parcels in the least possible time, passengers from the front (northernmost) carriages had to climb down to street level well beyond from the station building on to a poorly lit surface. 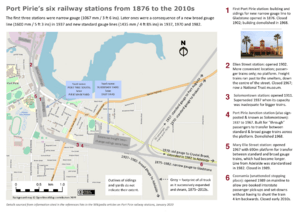 Like four of Port Pirie's six railway stations, Ellen Street was superseded as a consequence of lines being constructed to wider gauges eventually entering the city. From 1970, when a standard-gauge line from Sydney via Broken Hill would be completed, a 213-metre (700-foot) platform would be necessary to provide for passengers on far longer trains to transfer across between broad and standard gauge. Unlike the arrival of the broad gauge in 1937, which was solved by adding a third rail down the street, this time a completely new station would be needed. In November 1967, a new station was opened in Mary Elie Street and Ellen Street station was closed – 24 years after the Port Pirie Council had requested it.

After the standard gauge arrived and narrow-gauge operations ceased, all tracks in Ellen Street tracks were pulled up. Since the smelters beyond the station still had to be supplied with ore from Broken Hill, new standard gauge tracks paralleling the street were laid along the narrow corridor between the station building and the wharves.

Externally unaltered since its erection in 1902, the building retains its prominent place in Port Pirie as a National Trust of South Australia museum, 54 years since it closed as a station.

All content from Kiddle encyclopedia articles (including the article images and facts) can be freely used under Attribution-ShareAlike license, unless stated otherwise. Cite this article:
Port Pirie railway station (Ellen Street) Facts for Kids. Kiddle Encyclopedia.