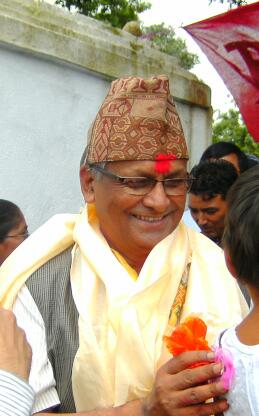 Post Bahadur Bogati (18 July 1953 – 15 September 2014) was a Nepalese politician. He was a member of the Unified Communist Party of Nepal (Maoist). He was also the vice chairman of the political party. He was the Minister for Information and Communications as well as Minister for Culture, Tourism and Civil Aviation.

Bogati was born in the Nuwakot District. He was married and had three children: two daughters and a son.

Bogati died from a brain haemorrhage caused by a cardiac arrest on 15 September 2014 in Kathmandu. He was 61.

All content from Kiddle encyclopedia articles (including the article images and facts) can be freely used under Attribution-ShareAlike license, unless stated otherwise. Cite this article:
Post Bahadur Bogati Facts for Kids. Kiddle Encyclopedia.