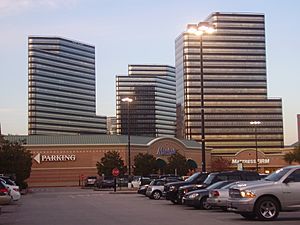 In 2011 Crescent announced that it plans to build, on the 2-acre (0.81 ha) park property, buildings for retail operations.

1 Post Oak Central has the headquarters of the Apache Corporation in Suite 100.

3 Post Oak Central has the headquarters of GDF Suez Energy Resources NA. In addition it contains three consulates, those of Qatar (Suite 810), South Korea (Suite 1250), and Turkey (Suite 1300). The Houston Korean Education Center, belonging to the consulate, is in Suite 750.

All content from Kiddle encyclopedia articles (including the article images and facts) can be freely used under Attribution-ShareAlike license, unless stated otherwise. Cite this article:
Post Oak Central Facts for Kids. Kiddle Encyclopedia.