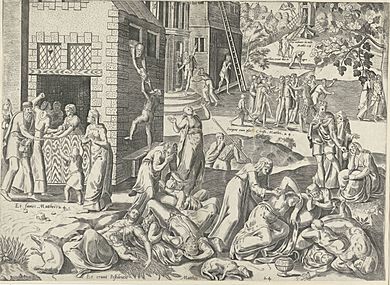 This etching by Frans Hogenberg illustrates the Second Coming of Christ and references the Olivet Discourse. Angels can be seen gathering the elect.

Predestination is a central belief in Calvinism. Calvinists believe that God picked those who he will save and bring with him to heaven before the world was created. They also believe people God does not save will go to Hell. John Calvin thought people who were saved could never lose their salvation and the "elected" (those God saved) would know they were saved because of their actions.

All content from Kiddle encyclopedia articles (including the article images and facts) can be freely used under Attribution-ShareAlike license, unless stated otherwise. Cite this article:
Predestination (Calvinism) Facts for Kids. Kiddle Encyclopedia.