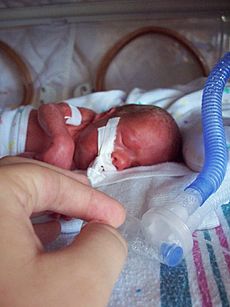 Premature baby in an incubator

Premature birth is when a baby is born before the normal end of pregnancy. In humans, a pregnancy normally lasts for about nine months. On average, a pregnancy lasts for 266 days.

Babies who are born before 37 complete weeks of pregnancy (calculated from the last menstrual period) are said to be premature. In the United States, about twelve percent of the babies are born prematurely (that is about one in every eight babies). In 2003, there were over 490,000 premature births.

All content from Kiddle encyclopedia articles (including the article images and facts) can be freely used under Attribution-ShareAlike license, unless stated otherwise. Cite this article:
Premature birth Facts for Kids. Kiddle Encyclopedia.