Princess Anne is a community located in the independent city of Virginia Beach, Virginia, United States at the junction of Princess Anne Road and North Landing Road near the West Neck River. The community, which dates from 1691, was named after Princess Anne of Denmark and Norway (later Anne, Queen of Great Britain, 1665–1714).

The community is the site of the Virginia Beach Municipal Center, where most of the major city, state, and federal offices are located, including the federal courthouse, jail, and city hall. Traffic is a major concern for the area as the Municipal Center is a major employment center that is only accessible by two-lane roads. In recent years, the community has seen a large increase in the construction of large homes in the area.

This section of the city was rural for quite some time, with a few middle to upper middle class neighborhoods that began popping up in the late 1970s and the 1980s. The area has seen a recent skyrocket in suburban business and residential neighborhoods, becoming increasingly affluent and private. Since the early 2000s (decade), large, upscale single family homes have been developed in new neighborhoods extending to London Bridge Road, General Booth, Sandbridge Road, and the area known as Red Mill.

Neighborhoods that are in the general area consist of those on Holland Road and London Bridge Road near Floyd E. Kellam High School, including newer, more extravagant neighborhoods that peaked in popularity in the early-to-mid-2000s (decade), but declined in popularity when the economy went down, as well as more classic, conservative homes that were built when the community was getting started in the late-1970s. Neighborhoods in the area include: Castleton, Christopher Farms, Courthouse Estates, Holland Oaks, Holland Woods, Indian River Plantation, Lago Mar, Lake Placid, Pine Ridge, Princess Anne Woods, Red Mill Farms, Rolling Wood, Strawbridge and others.

The area boasts an exceptional crime rate, as well as access to some of the best schools in the Virginia Beach City Public Schools system, including Kellam. Its enviable location, in close vicinity to Pungo, the Virginia Beach oceanfront, as well as the affluent coastal community, Sandbridge makes it even more of a draw for business and new residents. The area is home or has been home to such people as Missy Elliott, Timbaland, as well as others.

Like much of the Southeastern United States, the Princess Anne area of Virginia Beach has a subtropical climate, characterized by short, relatively mild winters and long, hot and humid summers. Primarily because of its close proximity to the Atlantic Ocean and location south of the Chesapeake Bay, temperatures are more moderate than those inland, with winters being warmer and averaging only 3 to 4 inches of snow per year. Annually, Princess Anne residents can expect more than to 50 inches of rain. 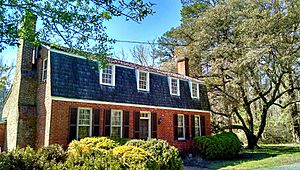 A wide variety of plants flourish here and can be seen growing throughout the area, including Camellias, Oleanders, Azaleas and Gardenias. Trees include Sabal and Windmill palms, live oak, crepe myrtles, and various magnolia, cherry blossom and fig trees. Loblolly pine, bald cypress, wax myrtle, sweetgum and many other indigenous plants are prevalent as well. Several areas in Princess Anne such as Courthouse and Lago Mar are well established and there are plants in bloom throughout the year.

All content from Kiddle encyclopedia articles (including the article images and facts) can be freely used under Attribution-ShareAlike license, unless stated otherwise. Cite this article:
Princess Anne, Virginia Facts for Kids. Kiddle Encyclopedia.