Princess Belle-Etoile is a French literary fairy tale written by Madame d'Aulnoy. Her source for the tale was Ancilotto, King of Provino, by Giovanni Francesco Straparola.

It is classified as Aarne-Thompson type 707 The dancing water, the singing apple, and the speaking bird. 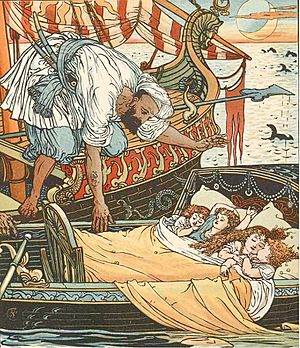 The children of Queen Blondine and sister Brunette picked up by a corsair after seven days at sea; illustration by Walter Crane

A queen was reduced to poverty, and to selling sauces to support herself and her three daughters. One day, an old woman came to them and begged that they feed her a fine meal. They did so, and the woman, being a fairy, promised that the next time they wished something without thinking of her, it would come true. For a long time, they could not make a wish without thinking of her, but one day, the king came by. The oldest daughter, Roussette, said that if she married the king's admiral, she would make sails for all his ships; the second, Brunette, that if she married the king's brother, she would make him lace enough to fill a castle; the third, Blondine, that if she married the king, she would bear him two sons and a daughter, who would have golden chains about their necks and stars on their foreheads, and jewels would fall from their hair.

A favorite repeated their words to the king, who summoned the sisters, and soon the marriages were concluded. A splendid wedding feast appeared out of nowhere, served on golden dishes, and the women realized it was from the old woman. Roussette hid the dishes when they left, but they were turned to earthenware when she arrived.

The king's mother was furious to hear that her sons had married such lowly women. Roussette was jealous of her sisters. Brunette gave birth to a son, and died. Blondine gave birth to two sons and a daughter, and the queen and Roussette put three puppies in their place. They took the children, including Brunette's, and gave them to a maid, who scrupled to kill them, but put them in a boat, with necklaces that might pay for their support if someone found them. The queen was sent back to her mother.

The fairies guarded the boat until it fell in with a pirate ship. The captain brought them to his childless wife. When they found that jewels fell from the children's hair, the captain gave up his piracy, because he would be rich without it. They named the princess Belle-Etoile (French for "Beautiful Star"); her older brother, Petit-Soleil ("Little Sun"); her younger, Heureux ("Happy"); and their cousin, who did not have the chain or star but was more beautiful than his cousins, Chéri ("Darling").

As Belle-Etoile and Chéri grew up, they fell in love, but believing themselves brother and sister, deeply regretted it. One day, she overheard the pirate and his wife talking, and learned where they had come from. She told her brothers and cousin, and they told the pirate and his wife that they wished to leave. The pirate implored them to stay, but Heureux persuaded him that they wondered too much about their birth to endure it. They set sail in a marvelous ship. It arrived at the castle of the king their father, and the king marveled over them. They asked only for a house in which to stay.

The Queen mother realized from the description that these were her grandchildren. She sent the maid who had failed to drown them, and the woman told Belle-Etoile that she needed the dancing water, which would keep her from ever looking old. She told that story, and Chéri set out at once, against her will. He found a spring and rescued a dove from drowning. It set all sorts of animals that burrow to dig up the dancing water, and Chéri returned with it. He freed the dove and it flew off rather sulkily. 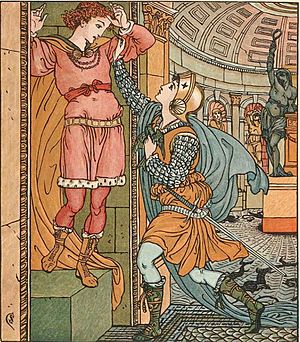 The maid came back with a tale of a singing apple, and Chéri once again set out. This time, a reading stranger directed him to the apple, and by helping a wounded dove, he gained the knowledge of the dragon that guarded it, and how it could be frightened off by mirrors, and returned with the apple.

The maid returned with a tale of a little green bird that knew everything. Belle-Etoile was deeply distressed by this, as she realized it could tell her who their parents were, and where they came from. Chéri set out again, but when he had nearly reached the bird, the rock opened, and he fell into a hall and was transformed into stone. Belle-Etoile fell ill from her distress at his absence, and Petit-Soleil set out to find Chéri, but suffered the same fate, and then Heureux did the same.

Belle-Etoile set out after them, and rescued a dove from snow. It advised her not to climb the mountain where the bird perched, but to sing below it, and lure it down. She did so, and the bird advised her on how to free her brothers and all the rest of the prisoners.

Meanwhile, the Queen Mother had persuaded the king to have his marriage to Blondine set aside, and marry again. Roussette persuaded the queen to invite Blondine to the wedding. The king invited the four children, and left a gentleman to await their arrival. The gentleman, on their arrival, told them the king's story. Belle-Etoile and her brothers arrived for the wedding, bringing their treasures, told how they were abandoned, and showed them to the king. Finally, the king asked the green bird who these children were, and where they came from. The bird proclaimed that they were the king's children and nephew.

The Queen Mother, Roussette, and the maid were all punished, and instead of marrying himself, the king married his daughter Belle-Etoile to Chéri.

As pointed by James Planché, author and dramatist who adapted several of MMe. d'Aulnoy's tales for the stage, the tale had remarkable similarities with Antoine Galland's The Sisters who envied their Cadette. He also noticed that the tale, when adapted to the English stage, renamed Prince Chéri as Prince Cherry and Princess Belle-Étoile as Princess Fair Star.

"The Dancing Water, the Singing Apple, and the Speaking Bird", "The Wicked Sisters", and "The Tale of Tsar Saltan" include the three sisters' marriages, and the sisterly hostility, though it is unusual to see only one sister evincing it. ("The Three Little Birds" is even more unusual, in that the oldest sister is the heroine and victim of her sisters.) "The Bird of Truth" begins with the children already abandoned, through the hostility of nobles to a low-born queen, but follows the same plot thereafter. "The Water of Life" sends the children after the treasures while omitting the motive to be rid of them; they only wish to make their home pleasant, and the one who told them had no ulterior motive.

The hostility from the mother-in-law is also found in "The Boys with the Golden Stars". It is a common motif in other fairy tales, not of this form: Perrault's version of "Sleeping Beauty", and "The Six Swans".

All content from Kiddle encyclopedia articles (including the article images and facts) can be freely used under Attribution-ShareAlike license, unless stated otherwise. Cite this article:
Princess Belle-Etoile Facts for Kids. Kiddle Encyclopedia.