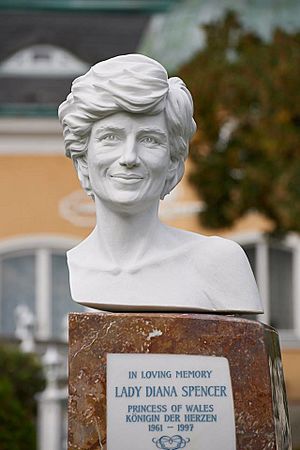 The Austrian Memorial of Diana, Princess of Wales. 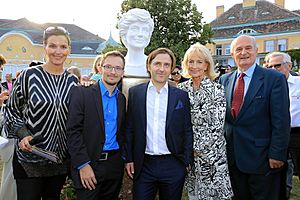 The Princess Diana Memorial Austria is the first memorial dedicated to Diana, Princess of Wales in a German-speaking country. It is placed in a public park of Schloss Schönbrunn in Vienna.

Ewald Wurzinger, an Austrian radio journalist at ORF is behind the private financed memorial. The white marble bust of the former princess boasts a dedication to the "Queen of Hearts". Diana's close friend Rosa Monckton has supported the memorial project. In 2014 the tribute was presented for the first time at Kensington Palace in London. The white bust and the memorial plaque were created by the Viennese sculptor Wolfgang Karnutsch. The memorial has been financed through private donations.

All content from Kiddle encyclopedia articles (including the article images and facts) can be freely used under Attribution-ShareAlike license, unless stated otherwise. Cite this article:
Princess Diana Memorial Facts for Kids. Kiddle Encyclopedia.