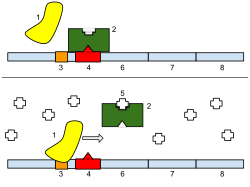 1: RNA Polymerase, 2: Repressor, 3: Promoter, 4: Operator, 5: Lactose, 6: lacZ, 7: lacY, 8: lacA.
Top: The gene is turned off. There is no lactose to inhibit the repressor, so the repressor binds to the operator. This stops the RNA polymerase from binding to the promoter and making lactase.
Bottom: The gene is turned on. Lactose inhibits the repressor. This allows the RNA polymerase to bind with the promoter, and express the genes. The genes now synthesize lactase. Eventually, the lactase will digest all of the lactose, until there is none to bind to the repressor. The repressor will then bind to the operator, stopping the manufacture of lactase.

In genetics, a promoter is a section of DNA which starts the transcription of a gene.

Promoters are near the genes they transcribe. They are on the same strand of DNA and are 'upstream'.

For the transcription to take place, the enzyme that makes RNA, known as RNA polymerase, must attach to the DNA near a gene.

Promoters contain specific DNA sequences which give the RNA polymerase a place to bind. Other proteins also help this to happen. Some can also stop it from happening. The whole thing is called "the regulation of gene expression".

In bacteria
The promoter is recognized by RNA polymerase and another protein.
In eukaryotes
The process is more complicated. At least seven different factors are needed so RNA polymerase II can bind to the promoter.

Promoters are important parts of the DNA. They work with other regulatory regions. Together, they adjust the level of transcription of a gene. So, genes get switched on when they are needed, and switched off when they are not. When they are on, they get adjusted up or down as needed.

All content from Kiddle encyclopedia articles (including the article images and facts) can be freely used under Attribution-ShareAlike license, unless stated otherwise. Cite this article:
Promoter (genetics) Facts for Kids. Kiddle Encyclopedia.