Kids Encyclopedia Facts
For other places with the same name, see Prospect Mountain.

Prospect Mountain is a mountain located in the town of Lake George in Warren County, New York. New York State Route 917A, an unsigned reference route also known as Prospect Mountain Veterans Memorial Highway, is a toll road maintained by the New York State Department of Environmental Conservation and is the highway by which one reaches the summit at 5.88 miles (9.46 km), where a 100-mile (160 km) view can be seen. 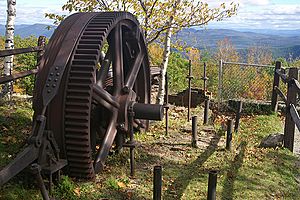 Cable gears for the old incline railway on Prospect Mountain

Prospect Mountain originally had to use an incline railway car to access the house at the top where people could dance and eat. Construction on the railway began in January 1895 and cost $120,000 total. Construction was finished six months later, with the railway opening on June 15, 1895. After failing financially, the railway system ceased operation in 1903. The area was bought and soon donated to the State of New York. The nearby hiking trail that heads up towards the mountaintop is part of the old railway.

In 1932, the building at the top of the mountain burned down and was replaced by a steel fire tower. For 30 years, people studied what to do with the land, which was owned by the state, and in 1954, New York Governor Tom Dewey signed legislation to build a highway up the mountain. Twelve years later, in 1966, then-Governor Nelson Rockefeller made funds available for the highway. The Prospect Mountain Veterans Memorial Highway was opened in 1969, dedicated to war veterans and providing access to the 2,021-foot (616 m) summit with a 100-mile (160 km) view at its peak.

All content from Kiddle encyclopedia articles (including the article images and facts) can be freely used under Attribution-ShareAlike license, unless stated otherwise. Cite this article:
Prospect Mountain (Warren County, New York) Facts for Kids. Kiddle Encyclopedia.