Province of Genoa facts for kids

The Province of Genoa (Italian Provincia di Genova) was a province in the Liguria region of Italy. Its capital is the city of Genoa. It was replaced by Metropolitan City of Genoa. 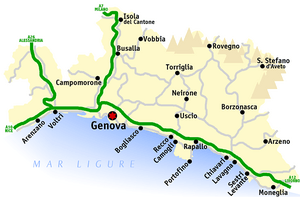 Map of the Province of Genoa.

Named after a mythical two-headed Greek God, Janus, protector of ships. The name derives from a Ligurian tribal word, for "knee" (genu), or the Latin name for gate, "janua". The city is set at the foot of mountains in the Gulf of Genoa at the most northerly end of the Tyrrhenian Sea, where at one time it ruled the maritime world. Genoa has fine examples of Baroque Church and Palace architecture.

The Province of Genoa was established in 1859 by decree and was established on 1 March 1860. The first chairman was Antonio Caveri, a lawyer. It was subdivided into five districts, Levante, Chiavari, Genoa, Savona, and Albenga, which largely corresponded to previous divisions of the Republic of Genoa, which had broken up after Napoleon's Italian campaign. King Vittorio Emanuele II approved the province's coat of arms in 1875 and they were amended in 1933 by the Fascist Government by the addition of fasces.

All content from Kiddle encyclopedia articles (including the article images and facts) can be freely used under Attribution-ShareAlike license, unless stated otherwise. Cite this article:
Province of Genoa Facts for Kids. Kiddle Encyclopedia.