Province of Ragusa facts for kids 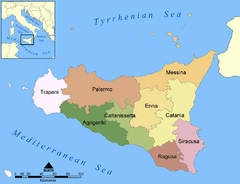 The Province of Ragusa (Italian: Provincia di Ragusa; Sicilian: Pruvincia 'i Rausa) was a province in the autonomous region of Sicily in southern Italy, located in the south-east of the island. Following the abolition of the Sicilian provinces, it was replaced in 2015 by the Free municipal consortium of Ragusa. Its capital is the city of Ragusa, which is the most southerly provincial capital in Italy.

From Scoglitti to Pozzallo, the Ragusan coastline is approximately 85 kilometres (53 mi) long. Along the Ragusan coast are many fishing villages such as Kaukana, Punta Secca, Marina di Ragusa and Marina di Modica. The Hyblaean Mountains are dominating the north of the province and its highest peaks are Monte Lauro, Monte Casale and Monte Arcibessi. The rivers of the province are the Irminio, Dirillo and Ippari and the only lake in the province is the Lago di Santa Rosalia along the course of the Irminio river. The skyline of Ragusa is punctuated by the towers, domes and cupolas of the many churches for which the province is known. The area is mostly unspoilt, as during the 19th century and early 20th century there was large migration from Ragusa to the more prosperous areas of Italy and abroad.

All content from Kiddle encyclopedia articles (including the article images and facts) can be freely used under Attribution-ShareAlike license, unless stated otherwise. Cite this article:
Province of Ragusa Facts for Kids. Kiddle Encyclopedia.