Provinces of Vanuatu facts for kids

Vanuatu is divided into six provinces. It has been divided this way since 1994. 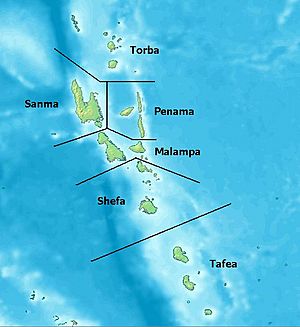 The provinces are divided into municipalities (usually consisting of an individual island) headed by a council and a mayor elected from among the members of the council.

From 1985 to 1994 Vanuatu was divided into eleven island regions:

During the Condominium era, specifically from 1968 to 1984 the group was divided into four administrative districts:

All content from Kiddle encyclopedia articles (including the article images and facts) can be freely used under Attribution-ShareAlike license, unless stated otherwise. Cite this article:
Provinces of Vanuatu Facts for Kids. Kiddle Encyclopedia.