Self-heal is edible: the young leaves and stems can be eaten raw in salads; the plant in whole can be boiled and eaten as a potherb; and the aerial parts of the plant can be powdered and brewed in a cold infusion to make a beverage. 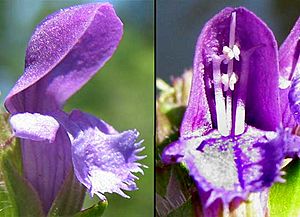 The leaves are lance shaped, serrated and reddish at the tip, about 2.5 cm (1 inch) long and 1.5 cm (half an inch) broad, and growing in opposite pairs down the square stem. Each leaf has 3-7 veins that shoot off the middle vein to the margin. The stalks of the leaves are generally short, but can be up to 5 cm (2 inches) long.

The flowers grow from a clublike, somewhat square, whirled cluster; immediately below this club is a pair of stalkless leaves standing out on either side like a collar. Flowers are two lipped and tubular. The top lip is a purple hood, and the bottom lip is often white; it has three lobes, with the middle lobe being larger and fringed upwardly. Flowers bloom at different times depending on climate and other conditions, but mostly in summer (from June to August in the USA).

Self-heal propagates both by seed and vegetatively by creeping stems that root at the nodes.

Two subspecies of Prunella vulgaris have been identified: var. vulgaris and var. lanceolota.

Prunella vulgaris is a perennial herb native in Europe, Asia, Africa, and North America, and is common in most temperate climates. It was introduced to many countries in the 1800s and has become invasive in the Pacific Islands, including Australia, New Zealand, and Hawaii. In Ireland, it is generally abundant. This herb also grows in Kashmir and is locally known as kalyuth. It is boiled in water, which used to wash and bathe in order to relieve muscle pain.

Roadsides, gardens and waste-places. Woodland edges, and usually in basic and neutral soils. 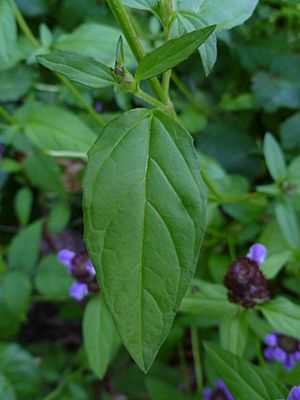 Prunella vulgaris is edible, and can be used in salads, soups, stews, and boiled as a pot herb. The Nlaka'pamux drank a cold infusion of the whole plant as a common beverage.

The plant has been used by aboriginal cultures to treat various physical ailments.

Prunella is derived from 'Brunella', a word which is itself a derivative, taken from "die Bräune", the German name for quinsy (a type of throat inflammation), which it was historically used to cure.

All content from Kiddle encyclopedia articles (including the article images and facts) can be freely used under Attribution-ShareAlike license, unless stated otherwise. Cite this article:
Prunella vulgaris Facts for Kids. Kiddle Encyclopedia.