The civil service is a collective term for a sector of government composed mainly of career bureaucrats hired on professional merit rather than appointed or elected. A civil servant or public servant is a person so employed in the public sector employed for a government department or agency.

Many consider the study of service to be a part of the field of public administration. Workers in "non-departmental public bodies" (sometimes called "QUANGOs") may also be classed as civil servants for the purpose of statistics and possibly for their terms and conditions. Collectively a state's civil servants form its civil service or public service.

An international civil servant or international staff member is a civilian employee who is employed by an intergovernmental organization. 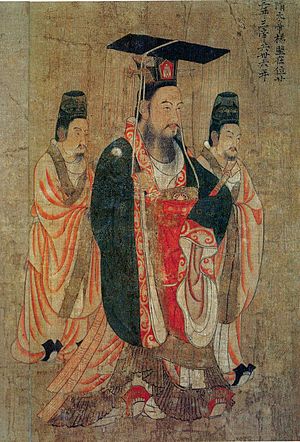 Emperor Wen of Sui (r. 581–604), who established the first civil service examination system in China; a painting by the chancellor and artist Yan Liben (600–673).

The origin of the modern meritocratic civil service can be traced back to Imperial examination founded in Imperial China.

All content from Kiddle encyclopedia articles (including the article images and facts) can be freely used under Attribution-ShareAlike license, unless stated otherwise. Cite this article:
Civil service Facts for Kids. Kiddle Encyclopedia.