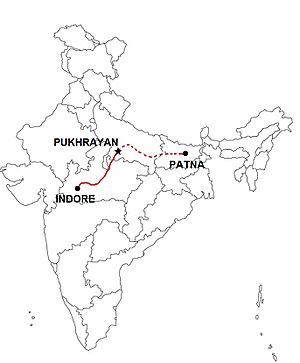 The Pukhrayan train derailment was an accident that happened on 20 November 2016 in the Indian state of Uttar Pradesh. The Indore-Rajendra Nagar express derailed in the place of Pukhrayan, Kanpur, Uttar Pradesh.It has resulted in 140 deaths and 200+ injuries.

The Indore-Rajendra Nagar Express is a passenger train between the Indore Junction and Rajendra Nagar Terminal. On 20 November 2016 at the time 3:00 the train derailed in the place of Pukhrayan, a town in Uttar Pradesh.

After the derailment about 142 passengers travelled in the train were reported dead and 200+ passengers were injured. It has been reported as one of the deadliest derailments after the 2010 Jnaneshwari Express derailment.

All content from Kiddle encyclopedia articles (including the article images and facts) can be freely used under Attribution-ShareAlike license, unless stated otherwise. Cite this article:
Pukhrayan train derailment Facts for Kids. Kiddle Encyclopedia.