Queen Elizabeth cake is a dessert cake prepared with sugar, flour, dates, eggs, and butter, and topped with a sugary icing infused with shredded coconut. The cake is named after Elizabeth II. It is a popular cake in Canada. The coconut topping is prepared by broiling or grilling. The icing is prepared using a caramel base. The dates used are chopped, and give the cake a dark coloration. Chopped walnuts or other types of nuts are sometimes used atop the cake. Queen Elizabeth cake is low in fat compared to other cakes, and has a moist consistency. It is sometimes served accompanied with tea. The cake is common at farmers markets and bake sales. It is sometimes purveyed at pastry shops in Canada. 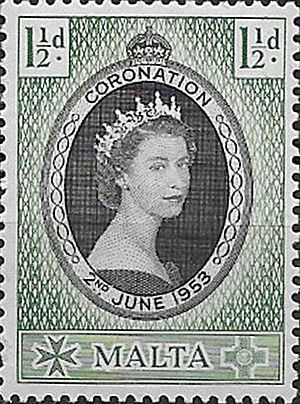 An account of Queen Elizabeth cake's origins is that it was prepared for the coronation of Elizabeth II in 1953. During this time, food rationing still existed in Great Britain, and a cake with few ingredients was in order. Another account is that the cake was invented for the 1937 coronation of King George VI and the Queen Mother Queen Elizabeth.

A recipe for Queen Elizabeth cake was published by the Coronation Cook Book in 1953 in celebration of Elizabeth II's coronation.

All content from Kiddle encyclopedia articles (including the article images and facts) can be freely used under Attribution-ShareAlike license, unless stated otherwise. Cite this article:
Queen Elizabeth cake Facts for Kids. Kiddle Encyclopedia.