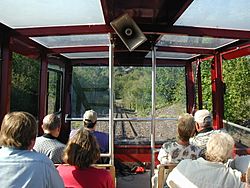 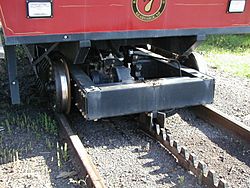 Prior to the creation of the current tourist tramway, there existed a tramway used by the Quincy Mine to transport ore down the hill to the Quincy Smelter. It consisted of two tracks with tramcars in counterbalance. It was 2,200 feet (670 m) long with a 500-foot (150 m) vertical drop.

Before the current tram was added, tourists were transported to the adit entrance by van, an indirect and cumbersome method. The solution of a tram was suggested by the vice president of the Quincy Mine Hoist Association, James R. Vivian Sr. The U.S. Economic Development Administration provided $420,000 in funds with a matching $200,000 raised by the Hoist Association. Construction began on April 12, 1996, and was completed on November 11, 1996. The tramway opened for use in May 1997.

The tramcar, designed by Phil Quenzi, was built by Royale Construction Inc. of Kearsarge, Michigan and the grading and tracking laying was carried out by MJO Construction of Hancock, Michigan. The project engineer was Robert D. Hitch, P.E. and the project manager was James R. Vivian Jr.

In the winter of 2009, the tram underwent a refurbishment, including new paint, new windows, and refurbished seats.

All content from Kiddle encyclopedia articles (including the article images and facts) can be freely used under Attribution-ShareAlike license, unless stated otherwise. Cite this article:
Quincy and Torch Lake Cog Railway Facts for Kids. Kiddle Encyclopedia.