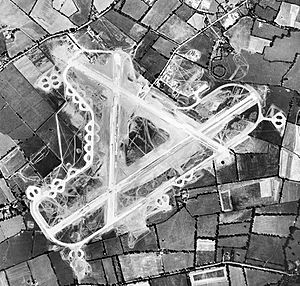 Aerial photograph of RAF Blakehill Farm, 17 July 1943. The technical and barrack sites are to the right (east) of the airfield.

The station was originally allocated to the United States Army Air Forces Ninth Air Force but not used. It opened in 1944 and was home for transport aircraft of No. 46 Group RAF Transport Command. In 1948 the airfield was a satellite of RAF South Cerney, and was used by training aircraft until the airfield closed in 1952 and was returned to agricultural use. The site is now a Wiltshire Wildlife Trust nature reserve.

The following units were also here at some point:

After the Second World War, GCHQ set up an "experimental radio station", a top secret research facility, on the site. It consisted of huge communications masts arranged in mysterious patterns in the middle of the old airfield. The site was still active in some capacity until the mid-1990s and traces of the former aerial mast bases can still be seen on satellite photographs.

All content from Kiddle encyclopedia articles (including the article images and facts) can be freely used under Attribution-ShareAlike license, unless stated otherwise. Cite this article:
RAF Blakehill Farm Facts for Kids. Kiddle Encyclopedia.