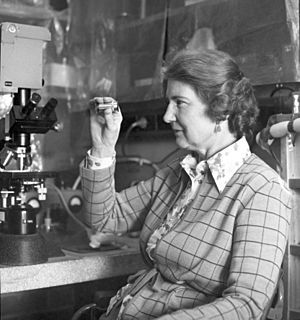 Kathleen Rachel Makinson (née White) (15 February 1917- October 2014) was an Australian research scientist. She held a number of prominent positions within CSIRO. She began work in the Division of Textile Physics in 1953, and was a senior principal research scientist from 1971-1977.

In 1981, she was elected a Fellow of the Australian Academy of Technological Sciences and Engineering; in 1982 she was made a Member of the Order of Australia (AM).

All content from Kiddle encyclopedia articles (including the article images and facts) can be freely used under Attribution-ShareAlike license, unless stated otherwise. Cite this article:
Rachel Makinson Facts for Kids. Kiddle Encyclopedia.