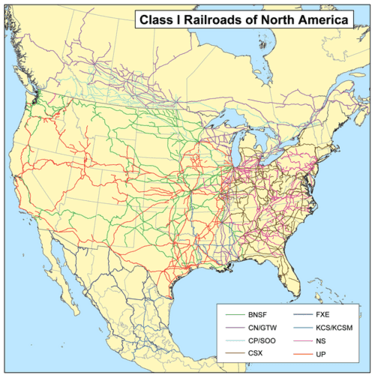 Class I railroads in North America in 2006

In the United States, railroads are Class I, II, or III, depending on how big they are. The Surface Transportation Board decides how big the railroads need to be to be in the classes.

In Canada, a Class I rail carrier is a company that has earned at least $250 million (CAD) in revenue for each of the previous two years.

Class I railroads are some of the most efficient kinds of transportation. They move a ton of freight almost 500 miles with each gallon of diesel fuel (0.47 l/100 km to move 0.91 metric tons).

In 2013, eleven railroads in North America were Class I. In the United States, Amtrak and seven freight railroads are Class I based on 2011 measurements released in 2013. 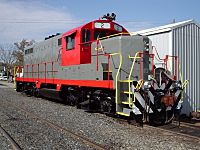 A Class III railroad earns less than $20 million (1991 dollars) in revenue every year.

All content from Kiddle encyclopedia articles (including the article images and facts) can be freely used under Attribution-ShareAlike license, unless stated otherwise. Cite this article:
Railroad classes Facts for Kids. Kiddle Encyclopedia.