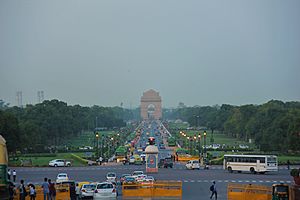 View of Raj Path, from Raisina Hill, with India Gate at its end

Rajpath (constructed as and formerly named King's Way during the period of the British Raj) is a ceremonial boulevard in New Delhi, India, that runs from Rashtrapati Bhavan on Raisina Hill through Vijay Chowk and India Gate, National War Memorial (India) to National Stadium, Delhi. The avenue is lined on both sides by huge lawns, canals and rows of trees. Considered to be one of the most important roads in India, it is where the annual Republic Day parade takes place on 26 January. Janpath (meaning "People's Way") crosses the road. Rajpath runs in east-west direction. Roads from Connaught Place, the financial centre of Delhi, run into Rajpath from north.

After climbing Raisina Hill, Rajpath is flanked by the North and South Blocks of the Secretariat Building. Finally it ends at the gates of Rashtrapati Bhavan. At Vijay Chowk it crosses Sansad Marg, and the Parliament House of India can be seen to the right when coming from the India Gate.

It is also used for the funeral processions of key political leaders of India. The opening scene of the movie Gandhi starts at Rajpath.

All content from Kiddle encyclopedia articles (including the article images and facts) can be freely used under Attribution-ShareAlike license, unless stated otherwise. Cite this article:
Rajpath Facts for Kids. Kiddle Encyclopedia.