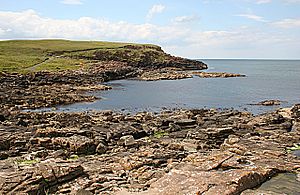 The headland, pointing north-northwest, is the tip of the peninsula on which the town of Portrush lies. The area of the headland is an Area of Special Scientific Interest. The rocks here are dolerite, an intrusive igneous rock formed from volcanic activity. There is a footpath around the headland, with grassland surrounding the path. There are also recreation grounds, including tennis courts and lawn bowls, and a car park.

Out at sea are a string of rocky islands known as the Skerries, the remains of past volcanic activity. These are also part of the Area of Special Scientific Interest.

All content from Kiddle encyclopedia articles (including the article images and facts) can be freely used under Attribution-ShareAlike license, unless stated otherwise. Cite this article:
Ramore Head Facts for Kids. Kiddle Encyclopedia.