Kids Encyclopedia Facts
Not to be confused with Rand McNally.

James Rand McNally (born January 30, 1944) is an American politician serving as the 50th lieutenant governor of Tennessee since 2017. A member of the Republican Party, he has been the state senator from the 5th district since 1987, which encompasses Anderson, Loudon, & Monroe counties, as well as part of Knox County. 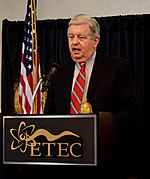 McNally giving a speech in 2017

McNally was born in Boston and later graduated from Oak Ridge High School in 1962, obtained a Bachelor of Science (BS) from Memphis State University in 1967, and graduated from University of Tennessee College of Pharmacy in 1969.

Beginning in the late 1960s, he worked as a pharmacist in chain drug stores. In 1978, he began employment as a hospital pharmacist at Methodist Medical Center in Oak Ridge, Tennessee. McNally has served in the Tennessee General Assembly since 1979. He was elected to the 91st through 94th General Assemblies as a member of the Tennessee House of Representatives. He was a key figure in the Operation Rocky Top investigation in the late 1980s, when he worked undercover to help the Federal Bureau of Investigation and Tennessee Bureau of Investigation obtain evidence on political corruption in the Tennessee state government.

All content from Kiddle encyclopedia articles (including the article images and facts) can be freely used under Attribution-ShareAlike license, unless stated otherwise. Cite this article:
Randy McNally Facts for Kids. Kiddle Encyclopedia.