Ranger Rick, originally Ranger Rick's Nature Magazine, is a children's nature magazine that is published by the United States National Wildlife Federation. The magazine offers feature articles and activities for children, ages 7 and up, in order to spark their interest in the outdoors and become more actively involved in the environment. The magazine's primary intention is to instill a passion for nature and promote activity outdoors. NWF also publishes two companion magazines, Ranger Rick Jr., which is aimed at ages 4–7, and Ranger Rick Cub, which is aimed at kids 0–4 years old.

Ranger Rick has a circulation of 525,000, and an estimated 200,000 more children are exposed to the magazine by viewing pre-used copies. The magazine is published ten times a year by the National Wildlife Federation. The headquarters is in Reston, Virginia.

Each issue includes nonfiction articles about various environmental and animal topics, fictional story-like articles, and color photography throughout. Also included in the magazine are activities such as nature-themed games, activities that get children to actively learn more about their environment, riddles, and jokes. Most of the pages of the magazine feature multi-page photo stories of animals in their natural habitats. There are also illustrated stories, games, riddles, nature news, poetry, contests, and other features and columns. Ranger Rick, a raccoon park ranger, is the title character in the longstanding magazine feature Ranger Rick's Adventures (originally Ranger Rick and his Friends): an illustrated short story depicting Ranger Rick and his compatriots from Deep Green Wood exploring the world, often encountering threats to wildlife and environmental problems. Rick or any one of his friends, including Boomer Badger and Scarlett Fox, always finds a solution to whatever problem they encounter, thus encouraging children to do their part to protect the natural environment. 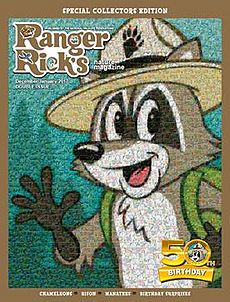 Previous Ranger Rick magazines have featured these and other adventure stories:

Ranger Rick is sometimes incorporated in elementary science classrooms to enhance the interest of environmental conservation in young children.

Because technology has greatly influenced and impacted the lives of children today, Ranger Rick magazine has made modifications in order to appeal to the children, who are becoming increasingly distant in engaging in outdoor exploration. In order to inspire a new generation of conservationists, attracting young readers is essential to magazines that promote environmental awareness and preservation efforts. Ranger Rick magazine has realized this importance of maintaining natural interest in young people. The magazine has since made changes within their content in order to appeal to a changed generation of children, not only for profit, but for the future of conservational efforts. The magazine has made such changes, for example, in the amount of narrative, by replacing the majority of narrative pieces with more visually engaging elements. Also, the Ranger Rick character himself has had a transformation as he once appeared as an accurate representation of a real raccoon, to becoming a very unrealistic, cartoon-like figure. Some sections of the magazine have been modified as well, such as placing the text and titles in more modern and ideal locations to visually draw in readers.

Ranger Rick Jr. is a magazine for children ages 4 to 7. It has its origins in Your Big Backyard, a magazine aimed at preschoolers and kids ages 3 to 7. It was established in 1979 as a sister publication to Ranger Rick and Wild Animal Baby, both published by the National Wildlife Federation. The bulk of the magazine consisted of children's activities.

The name of the magazine was changed to Big Backyard in September, 2011. In December 2012 NWF merged Wild Baby Animal and Big Backyard to create a new magazine for children ages 4 to 7, called Ranger Rick, Jr..

All content from Kiddle encyclopedia articles (including the article images and facts) can be freely used under Attribution-ShareAlike license, unless stated otherwise. Cite this article:
Ranger Rick Facts for Kids. Kiddle Encyclopedia.