Raspberry Island (formerly called Navy Island) is an island in the Mississippi River in Saint Paul, Minnesota. Buildings for the Minnesota Boat Club have sat upon the island since 1885; the current boathouse was built in 1910. Between 1949 and 1968, the island was used by the United States Navy. Today, it is home to paths, a plaza, and a bandshell.

Raspberry Island was originally named for the wild raspberries that grew on it, with the name appearing on the first map of downtown Saint Paul in 1851. In 1885, a wooden structure was built to house the Minnesota Boat Club, the oldest athletic club in the state. The Club constructed a new home in 1910, a George H. Carsley-designed building in Mission Revival-style architecture that is still used today. The name Raspberry Island remained until 1949, when the United States Navy built a small base on the eastern side of the island—the west side was owned by the Boat Club—and it subsequently became known as Navy Island. Flooding in 1965 washed the 150-foot (46 m) wooden bridge connecting the island to the mainland from its moorings and away downstream. The Navy departed from the island in 1968. Many downtown Saint Paul employees used the island as an unofficial parking lot during the 1970s and 1980s. A 1995 Saint Paul City Council resolution changed the name back to Raspberry Island.

Log jams were recorded near the bridge that connects the island to the mainland in 2010 and again in 2013. These caused trouble for local boaters whose docking space was diminished by the presence of the logs. The City of Saint Paul funded removal of the logs in both instances. 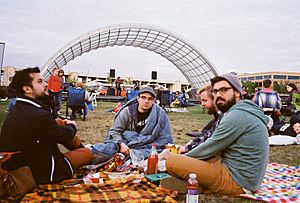 Raspberry Island is located under the Wabasha Street Bridge. It has a total area of 2 acres (8,094 m2) and sits at an elevation of 696 feet (212 m) above sea level. The Raspberry Island Bridge connects it to the mainland.

A renovation of Raspberry Island that bolstered and added amenities to the "rather scruffy, barren place" occurred in 2007–2008. The shoreline was strengthened with limestone riprap; public restrooms were added to the Boat Club building; a plaza, trails, and an event lawn were constructed near a new bandshell designed for Saint Paul's Schubert Club; and 131 trees and numerous other shrubs, grasses, and flowers were planted. The project cost $5 million.

Local WCCO-TV named the island's Boat Club one of Minnesota's best places at which to hold a wedding reception, noting that "[w]hile it might be located downtown, none of the bustle or the noise of the city reaches the island".

All content from Kiddle encyclopedia articles (including the article images and facts) can be freely used under Attribution-ShareAlike license, unless stated otherwise. Cite this article:
Raspberry Island (Minnesota) Facts for Kids. Kiddle Encyclopedia.