Kids Encyclopedia Facts
For the nearby beach, see Rattray Head. For the former burgh in Perthshire, see Blairgowrie and Rattray. 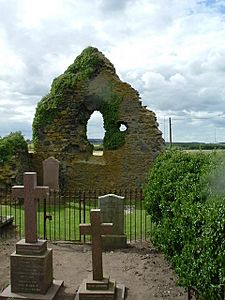 Rattray (historic: Rettre; occasionally: Rattery; Scottish Gaelic: Raitear), (found at grid reference NK088578) had been settled as far back as 4000 BC and was named a Royal Burgh in 1564 by Mary, Queen of Scots, "to put an end to the disputes about superiority over it between William Keith, 4th Earl Marischal and George Hay, 7th Earl of Erroll". The ancient burgh was located near to Crimond, but the village was largely destroyed and never recovered after a storm in the 18th century that covered it in shifting sands from the nearby dunes at Rattray Head. However, there is still a small modern settlement in the area.

All content from Kiddle encyclopedia articles (including the article images and facts) can be freely used under Attribution-ShareAlike license, unless stated otherwise. Cite this article:
Rattray, Aberdeenshire Facts for Kids. Kiddle Encyclopedia.