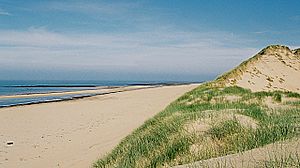 Looking south across the sand dunes at Rattray Head

Rattray Head, historically Rattray Point, is a headland in Buchan, Aberdeenshire, on the north-east coast Scotland. To north lies Strathbeg Bay and Rattray Bay is to its south. The dunes at Rattray Head beach can be up to 75 feet (23 m) high and stretch 17 miles (27 km) from St Combs to Peterhead.

The 120-foot (37 m) Rattray Head lighthouse was built in 1895. It was built by the engineers and brothers David Alan Stevenson and Charles Alexander Stevenson. In February 1982 it became unmanned and self-working.

The lighthouse is accessible by way of a causeway that is usually underwater and only visible at low tide. It is wide enough for a vehicle to cross.

Remains of several shipwrecks can still be seen on the beach.

All content from Kiddle encyclopedia articles (including the article images and facts) can be freely used under Attribution-ShareAlike license, unless stated otherwise. Cite this article:
Rattray Head Facts for Kids. Kiddle Encyclopedia.