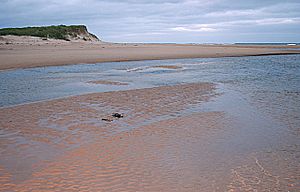 St Combs is a small fishing village in Aberdeenshire, Scotland immediately southwest of Inverallochy near Fraserburgh which has existed since at least the 17th century. It takes its name from a church to St Colm or Columba that used to exist in the area.

There is considerable evidence of local habitation by early man in and around St Combs. Somewhat to the southwest lies the Catto Long Barrow and a number of tumuli.

St Combs railway station opened in 1903 and closed in 1965. It was the terminus of a short branch line from Fraserburgh. In 1904 Kirkton Bridge Halt railway station was opened on the line.

St Combs also hosts an annual football tournament which is renowned in the amateur football world as being a breeding ground for fresh new talent. The highlight of this event so far has to be the personal appearance of Michael Van Wijk aka Gladiators Wolf as a guest trophy presenter.

All content from Kiddle encyclopedia articles (including the article images and facts) can be freely used under Attribution-ShareAlike license, unless stated otherwise. Cite this article:
St Combs Facts for Kids. Kiddle Encyclopedia.