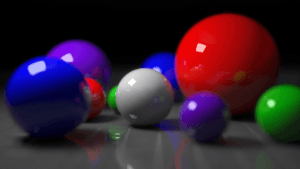 With ray tracing, objects in the scene are described with geometrical shapes like spheres or planes. The computer then sends rays (straight lines) forward from where the camera is. The objects that get hit by these rays are the objects that the camera can see. The computer then draws these objects. This is similar to how our eyes see, but in the real world the rays (light) go the opposite way – from the world to our eyes.

All content from Kiddle encyclopedia articles (including the article images and facts) can be freely used under Attribution-ShareAlike license, unless stated otherwise. Cite this article:
Ray tracing Facts for Kids. Kiddle Encyclopedia.