Rabbi Re'em Ha'Cohen (Hebrew: רא"ם הכהן, born in March 10, 1957) is an Israeli Rabbi. Ha'Cohen is the rosh yeshiva of Yeshivat Otniel (together with Rabbi Binyamin Kalmanzon). He is a well-known religious zionist. He is also the community rabbi of the town Otniel, which is in South Mount Hebron, in the occupied Palestinian territories.

Ha'Cohen grew up in Jerusalem. He is married to Noa and a father of 9 children.

Ha'Cohen holds that smoking is forbidden by the Jewish religion. He also believes that Jewish law says people should be organ donors. 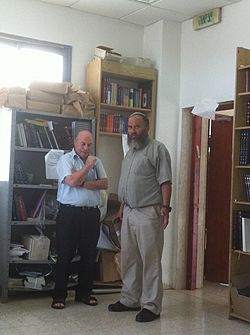 All content from Kiddle encyclopedia articles (including the article images and facts) can be freely used under Attribution-ShareAlike license, unless stated otherwise. Cite this article:
Re'em Ha'Cohen Facts for Kids. Kiddle Encyclopedia.