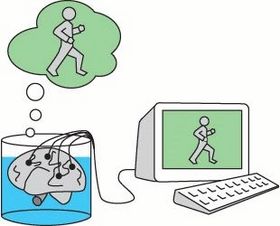 A brain in a vat that believes it is walking

Reality means anything that exists. An event that has actually happened, or a thing which really exists is said to have "reality." Something close to reality is realistic.

All the same, what is abstract plays a role in everyday life and in academic research. For instance, causality, virtue, life and justice are abstract concepts. They are difficult to define, but they are not pure delusions.

Television programs that are not scripted are called Reality TV.

All content from Kiddle encyclopedia articles (including the article images and facts) can be freely used under Attribution-ShareAlike license, unless stated otherwise. Cite this article:
Reality Facts for Kids. Kiddle Encyclopedia.