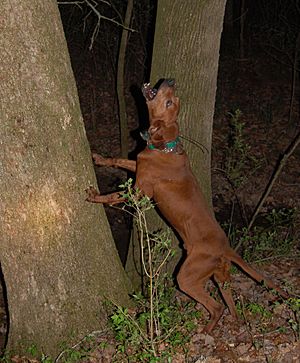 The Redbone Coonhound has a lean, muscular, well proportioned build. The body type is typical to the coonhounds subgroup, with long straight legs, a deep chest, and a head and tail that are held high and proud when hunting or showing. The Redbone Coonhound has brown eyes and a face that is often described as having a pleading expression. The dog's eyes may be dark brown to hazel, but a darker color is preferred. The coat is short and smooth against the body, but coarse enough to provide protection to the skin while hunting through dense underbrush. The large paws have especially thick pads, with webbed toes, and dewclaws are common. The nose is often black and prominent. The ears are floppy and will most likely extend to nearly the end of the nose if stretched out. Coloration of the nose is black, and the coat color is always a rich red, though a small amount of white on the chest, between the legs, or on the feet is sometimes seen. The white chest and feet markings that occasionally appear on Redbone Coonhound puppies today is most likely a throwback to the mixing of Bloodhound and Foxhound bloodlines. Variations of black fur on the face and muzzle are also not uncommon.

The Redbone Coonhound is affectionate, gentle, and has a strong desire to please its owner.

The Redbone is an extremely vocal dog, as would be expected of a hound. The breed is known for its distinctive "drawling" bark, also known as a bay. Hunters who use the breed follow the sound of the voice as the dogs track quarry. It takes training to first control their excited, emotional, booming barks, but also to help provide the hounds an outlet for their 'tracking' desires that sometimes drive their vocalizations. A Redbone Coonhound will have a "specific" bay when it has an animal either treed or cornered. This bay is very much distinguishable from their normal day to day baying. A Redbone's bay helps when hunting. A Redbone Coonhound's training is a key component to creating a capable hunting dog. Proper training should begin as soon as possible. The Redbone Coonhound has a stubborn mindset that can work to the owners advantage, but the Redbone can also absorb a significant amount of information that can help with creating a reliable hunting dog. 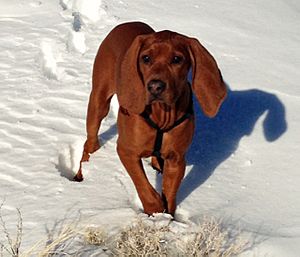 Young Redbone Coonhound in the snow 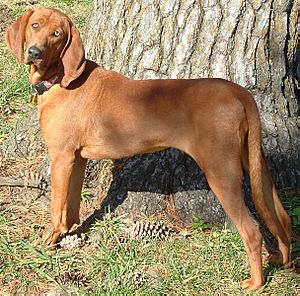 The Redbone Coonhound was bred as a hunting dog.

Redbones do not reach full physical and mental maturity until the age of two years, comparatively slower than many other breeds. As with all breeds, puppies and adolescents are more energetic than adults and need lots of activity or they will become destructive, often chewing furniture, chewing shoes, and snooping around the garbage. When going through obedience training it is imperative for a pet owner to know that harsher methods are not effective with this breed. Coonhounds are typically stubborn but can also be sensitive; being overbearing can frighten the animal. Once trained and aware of its size the breed is known to be very gentle and can be trusted with children. While playing with older children they will happily jump into the family swimming pool to play. The dogs are adept in the water and can be compared to other water-loving breeds like the Labrador Retriever in swimming ability.

Coonhounds are in the same group as well known breeds such as the Beagle, Basset Hound, and Bloodhound: they are bred primarily to track game using sight and scent over long distances. They also instinctively mark their position for following hunters by vocalizing as they catch up with their quarry. Therefore, this breed will have the desire to chase small animals such as rabbits, squirrels, badgers, or even cats. A Redbone Coonhound should have a tall fence to retain the animal and keep it from wandering.

Hunting dogs require a good deal of exercise to stay happy and healthy. The breed is best suited to the countryside or suburbs; urban environments are less than ideal but workable so long as they get roughly an hour and a half or more of walking per day. Redbones are known to have an independent intelligence especially well suited for problem solving. This can be an issue if the problem they want to solve is their backyard fence or the dog-proof garbage. Most Redbones require leashes to avoid wandering. In a hunt setting they will often make quarter mile loops away from the pack searching for scent of their prey before returning or using their bay to raise the alarm, thus bringing the pack to their aid. When breeding the Redbone Coonhound, traits such as determination and endurance created a dog that isn't afraid to hunt until its exercise is accomplished. Because of their instinctive desire to follow scents, they are eager to follow their noses and may ignore their owners' commands.

All content from Kiddle encyclopedia articles (including the article images and facts) can be freely used under Attribution-ShareAlike license, unless stated otherwise. Cite this article:
Redbone Coonhound Facts for Kids. Kiddle Encyclopedia.