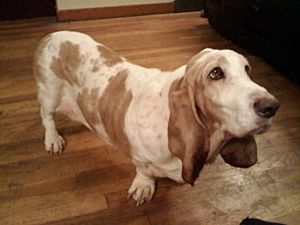 The Basset Hound is a short-legged dog, of the hound family. Bassets are used in hunting to detect the scent of game. Their sense of smell for tracking is second only to that of the Bloodhound.

The name Basset comes from French words meaning "rather low".

Basset Hounds usually have coats of brown, black or white and are most often spotted. Sometimes they can be other colors. Basset Hounds have been bred from the nineteenth century. They are said to descend from the Basset d'Artois. Basset Hounds are 30–38 centimetres (12–15 in) tall, and can weight up to 30 kilograms (66 lb). 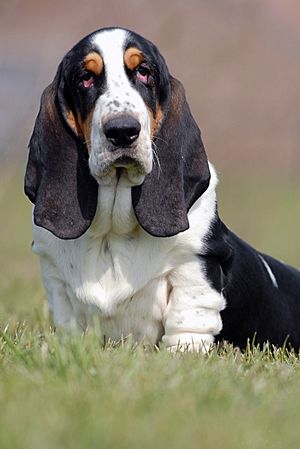 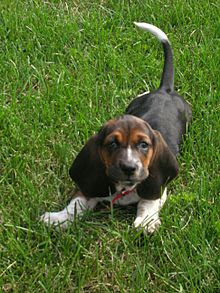 Bassets are large, short, solid and long, with curved sabre tails held high over their long backs. An adult dog weighs between 20 and 35 kilograms (44 and 77 lb). This breed, relative to size, is heavier-boned than any other.

This breed, like its ancestor the Bloodhound, has a hanging skin structure, which causes the face to occasionally look sad; this, for many people, adds to the breed's charm. The dewlap, seen as the loose, elastic skin around the neck, and the trailing ears which along with the Bloodhound are the longest of any breed, help trap the scent of what they are tracking. Its neck is wider than its head. This, combined with the loose skin around its face and neck means that flat collars can easily be pulled off. The looseness of the skin results in the Basset's characteristic facial wrinkles. The Basset's skull is characterised by its large dolichocephalic nose, which is second only to the Bloodhound in scenting ability and number of olfactory receptor cells.

The coat of a Basset is medium-short, smooth and hard, and sheds frequently.

Any true hound colour is acceptable in Basset Hounds, and no one colour is preferred over any other.

The source of colour is the E Locus (MC1R), which has four alleles: EM, EG, E, and e. The EM, E and e alleles are present in the Basset Hounds. The E allele allows for the production of both red and black pigments, so is present with the majority of colour patterns in Basset Hounds.

Red and Lemon colours are caused by the e allele of MC1R. The e allele is recessive, so red and lemon dogs are homozygous e/e. Lemon dogs are lighter in colour than Reds, but the genetic mechanism that dilutes phaeomelanin in this instance is unknown. No black hairs will be present on either Red or Lemon dogs. If there are any black hairs, the dog is officially a tricolour.

The EM allele produces a black mask on the face that may extend up around the eyes and onto the ears. This pattern is most easily seen on Mahogany dogs, although any Basset colour pattern may express the EM allele, except for "red and white" or "lemon and white" due to e/e.

Many Bassets have a clearly defined white blaze and a white tip to their tail, intended to aid hunters in finding their dogs when tracking through underbrush.

The Basset Hound coat is naturally oily, giving off a distinctive "hound scent", which is natural to the breed. 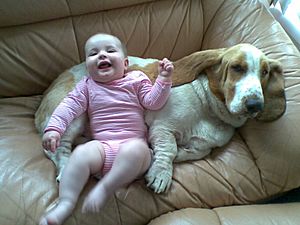 Basset Hounds are renowned for their gentle, docile demeanor.

The Basset Hound is a friendly, outgoing, and playful dog, tolerant of children and other pets.

Basset Hounds have large pendulous ears (known as "leathers") that do not allow air to circulate inside them, unlike other breeds with erect or more open ears. This can result in infections and ear mites if their ears are not kept clean and dry.

According to the Basset Hound Club of America, the height of a Basset should not exceed 14 inches or 36 cm.

The Basset Hound's short stature is due to the genetic condition osteochondrodysplasia (meaning abnormal growth of both bone and cartilage). Dwarfism of this type in most animals is traditionally known as achondroplasia. Basset Hounds, Dachshunds and Bulldogs are a few of the dog breeds classified as Achondroplastic. This bone growth abnormality may be a predisposing factor in the development of elbow dysplasia seen in the breed, which leads to arthritis of the elbow joint.

In addition to ear problems, basset hounds may be susceptible to eye issues. Because of their droopy eyes, the area under the eyeball will collect dirt and become clogged with a mucus. Basset Hounds are prone to yeast infections in the folds around the mouth, where drool can collect without thoroughly drying out. 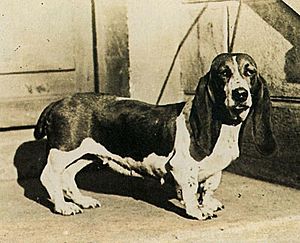 The earliest-known depictions of short-legged hunting dogs are engravings from the Middle Kingdom of Egypt. Mummified remains of short-legged dogs from that period have been uncovered in the Dog Catacombs of Saqqara, Egypt. Scent Hounds were used for hunting in both Ancient Greece and Ancient Rome.

The modern Basset Hound was bred to hunt rabbits and hare in France, a country known for its development of many breeds of scent hound. Hunting with a pack of bassets is still not uncommon in France and the UK, although it seldom occurs in the United States.

The basset type originated in France, and is descended from the 6th century hounds belonging to St Hubert of Belgium, which through breeding at the Benedictine Abbey of St. Hubert eventually became what is known as the St Hubert's Hound around 1000 AD. St Hubert's original hounds are descended from the Laconian (Spartan) Hound, one of four groups of dogs discerned from Greek representations and descriptions. These scent hounds were described as large, slow, 'short-legged and deep mouthed' dogs with a small head, straight nose, upright ears and long neck, and either tan with white markings or black with tan markings. Laconian Hounds were reputed to not give up the scent until they found their prey. They eventually found their way to Constantinople, and from there to Europe. 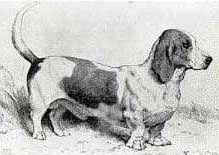 1879 woodcut of Everett Millais' first basset-type Hound "Model", who was imported from France in 1874.

The first mention of a "basset" dog appeared in La Venerie, an illustrated hunting text written by Jacques du Fouilloux in 1585. The dogs in Fouilloux's text were used to hunt foxes and badgers. It is believed that the Basset type originated as a mutation in the litters of Norman Staghounds, a descendant of the St Hubert's Hound. These precursors were most likely bred back to the St. Hubert's Hound, among other derivative French hounds. Until after the French Revolution around the year 1789, hunting from horseback was the preserve of kings, large aristocratic families and of the country squires, and for this reason short-legged dogs were highly valued for hunting on foot.

The controlled breeding of the short haired basset began in France in the year 1870. From the existing Bassets, Count Le Couteulx of Canteleu fixed a utilitarian type with straight front legs known as the Chien d'Artois, whereas Mr. Louis Lane developed a more spectacular type, with crooked front legs, known as the Basset Normand. These were bred together to create the original Basset Artésien Normand.

French basset hounds were being imported into England at least as early as the 1870s. While some of these dogs were certainly Basset Artésien Normands, by the 1880s linebreeding had thrown back to a different heavier type. Everett Millais, who is considered to be the father of the modern Basset Hound, bred one such dog, Nicholas, to a Bloodhound bitch named Inoculation through artificial insemination in order to create a heavier basset in England in the 1890s. The litter was delivered by caesarean section, and the surviving pups were refined with French and English bassets. The first breed standard for what is now known as the Basset Hound was made in Great Britain at the end of 19th century. This standard was updated in 2010.

The Basset Hound was bred to hunt, with a keen nose and short stature suited to small-game hunting on foot. A variety of Basset Hound developed purely for hunting by Colonel Morrison was admitted to the Masters of Basset Hounds Association in 1959 via an Appendix to the Stud Book. This breed differs in being straighter and longer in the leg and having shorter ears.

All content from Kiddle encyclopedia articles (including the article images and facts) can be freely used under Attribution-ShareAlike license, unless stated otherwise. Cite this article:
Basset Hound Facts for Kids. Kiddle Encyclopedia.