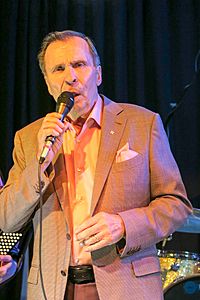 Reijo Toivo Taipale (9 March 1940 – 26 April 2019) was a Finnish pop singer. He performed mostly Schlager music, tango and ballads. He first became known in the music scene during the 1950s. Some of his famous songs include "Elämän virta", "Sateen hiljainen ääni" and "Valon lapsi". He had over 30 albums to his name. He also released albums with Eino Grön in the 1970s. He was born in Miehikkälä.

All content from Kiddle encyclopedia articles (including the article images and facts) can be freely used under Attribution-ShareAlike license, unless stated otherwise. Cite this article:
Reijo Taipale Facts for Kids. Kiddle Encyclopedia.