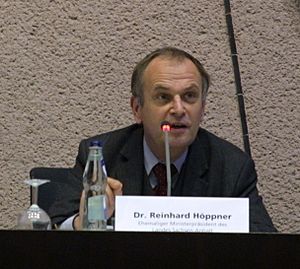 Reinhard Höppner (2 December 1948 – 9 June 2014) was an (East) German politician, mathematician, and writer. He was a member of the Social Democratic Party of Germany (SPD). He was Minister-President of Saxony-Anhalt from July 1994 until 16 May 2002. The role was taken by Wolfgang Böhmer after Höppner's term was over.

Höppner was born in Haldensleben, Saxony-Anhalt, East Germany. He performed several leading positions in the Evangelical Church in Germany.

Höppner died from cancer on 9 June 2014 in Magdeburg, Saxony-Anhalt, aged 65.

All content from Kiddle encyclopedia articles (including the article images and facts) can be freely used under Attribution-ShareAlike license, unless stated otherwise. Cite this article:
Reinhard Höppner Facts for Kids. Kiddle Encyclopedia.