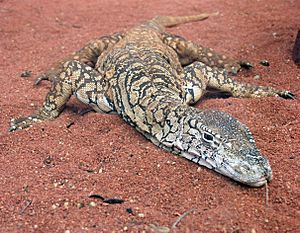 The reptiles of Australia are a diverse group of animals, widely distributed across the continent. Three of the four orders of reptiles are native to Australia: Testudines, Squamata and Crocodilia. The only missing extant order is Sphenodontia, containing the tuataras, which are endemic to New Zealand. Australia has a large diversity of reptiles, with over 860 species. This is rich in comparison to other continents. For example, North America has approximately 280 species of reptile. The most diverse group is Squamata, also known as the snakes and lizards. The snakes and lizards are especially diverse in the arid areas of Australia, where diversity of other fauna is generally low. Spinifex grass is a major habitat which allows them to remain in a relatively cool, moist area.

Australia has a large array of reptiles which can be dangerous to humans. The world's largest reptile, the saltwater crocodile (Crocodylus porosus), is native to Australia.

All content from Kiddle encyclopedia articles (including the article images and facts) can be freely used under Attribution-ShareAlike license, unless stated otherwise. Cite this article:
List of reptiles of Australia Facts for Kids. Kiddle Encyclopedia.