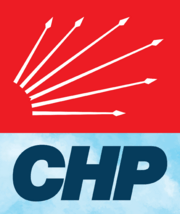 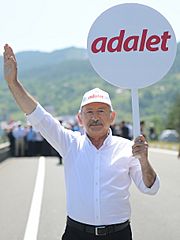 Kemal Kılıçdaroğlu, the current leader of the CHP.

The Republican People's Party (Turkish: Cumhuriyet Halk Partisi, CHP) is the oldest political party in Turkey. Their ideologies are social democracy and Kemalism.

They are currently the second largest party in the Turkish Parliament, with 132 out of 550 seats and they form the Main Opposition of Turkey. Their founder is Mustafa Kemal Atatürk and their current leader is Kemal Kılıçdaroğlu.

On September 7, 1919, Turkish nationalists established a resistance organisation against the invasion of Turkey. On September 9, 1923, the organisation officially declared itself as a political party and it was the Republican People's Party.

Leaders of the CHP

All content from Kiddle encyclopedia articles (including the article images and facts) can be freely used under Attribution-ShareAlike license, unless stated otherwise. Cite this article:
Republican People's Party Facts for Kids. Kiddle Encyclopedia.